PSA Peugeot Citroen, or Peugeot for short, is a former French industrial icon. In the past two years, it struggled to escape from € 7 billion losses. A €3 billion capital increase from the French state and Dongfeng, a Chinese carmaker, should help Peugeot secure its future[1]. Will it be bright?
The alliance between Peugeot and Dongfeng is one of the thousands of alliances that companies formed around the world in the past 10 years. The classic frameworks of strategy analysis, however, don’t provide much guidance for how to extract value from alliances. Take for example a classic “value chain” tool popularized by Michael Porter:

* This figure is borrowed from http://www.insemble.com/software-value-chain.html
As a business educator and a consultant, I love this framework. It helps map activities of a firm and to think about how they relate to its competitive advantage. The weakness of the framework is that it is too much focused inside the firm and is not meant to help executives think about opportunities for value creation by collaborating with other companies.
I recently co-authored a book “Network Advantage: How to Unlock Value from Your Alliances and Partnerships”. In this book we offer advice on how companies can achieve competitive advantage by managing alliances and partnerships with customers, suppliers or competitors.
When I taught this book at INSEAD, a group of Executive Education participants[2] proposed a really cool way to integrate the logic behind the value chain with alliance thinking. This gave birth to a new framework which we call “Alliance Radar.”
The Radar can help you look outside of your firm.  It:
·       links alliances to specific parts of your value chain
·       helps visualize all of the alliances which your company has
·       identifies new opportunities for value creation across different alliances.
Let’s use this tool to compare alliances of Toyota and Peugeot. I picked these examples because I own cars from both car makers. Another reason is that lately Toyota has been much more innovative than Peugeot and this tool can help understand why.
Let’s start by identifying the key areas of two companies’ value chain. For simplicity, let’s assume that they are Production, R&D, Sales and After Sales.  You can draw a radar like this: 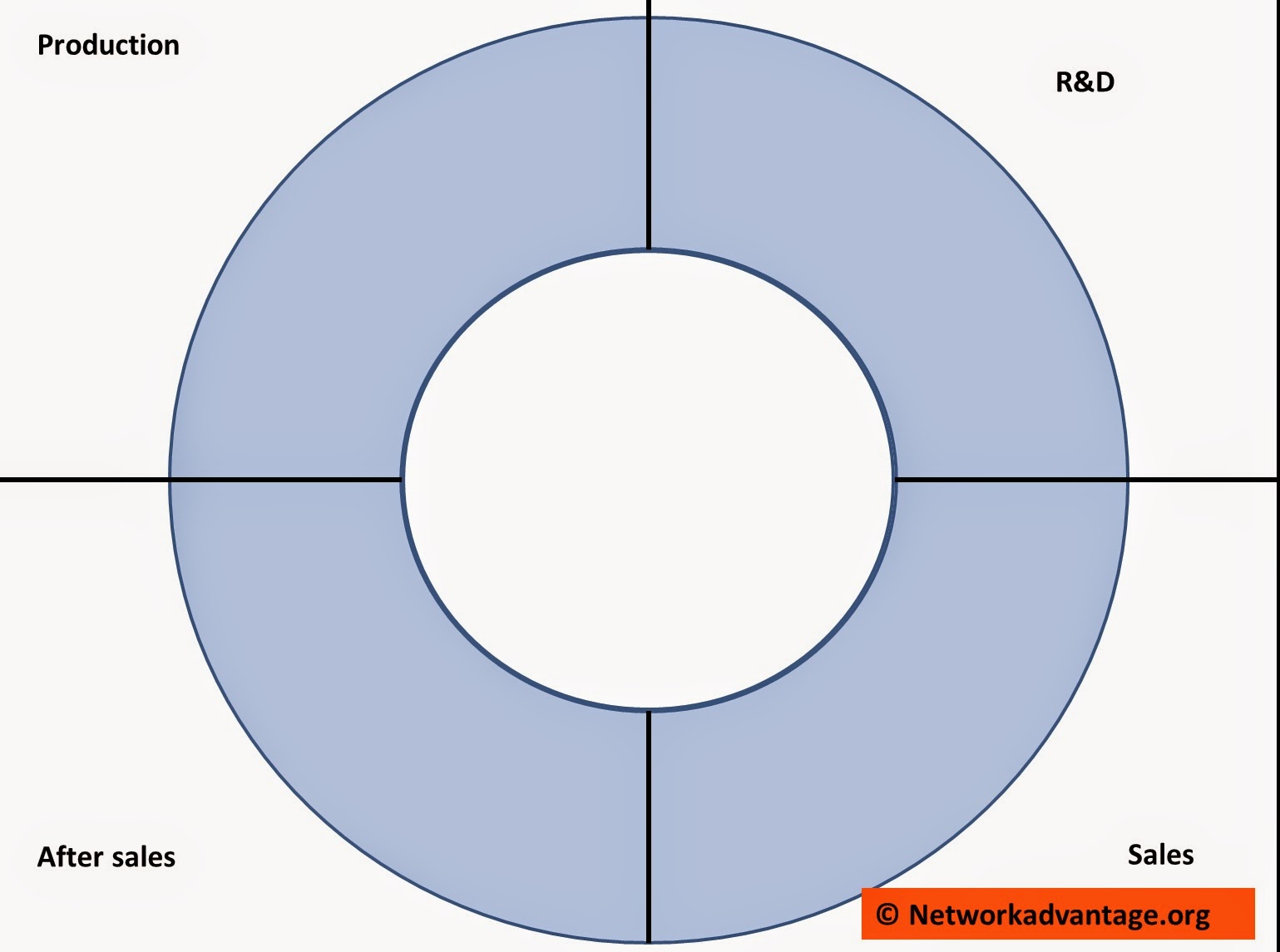 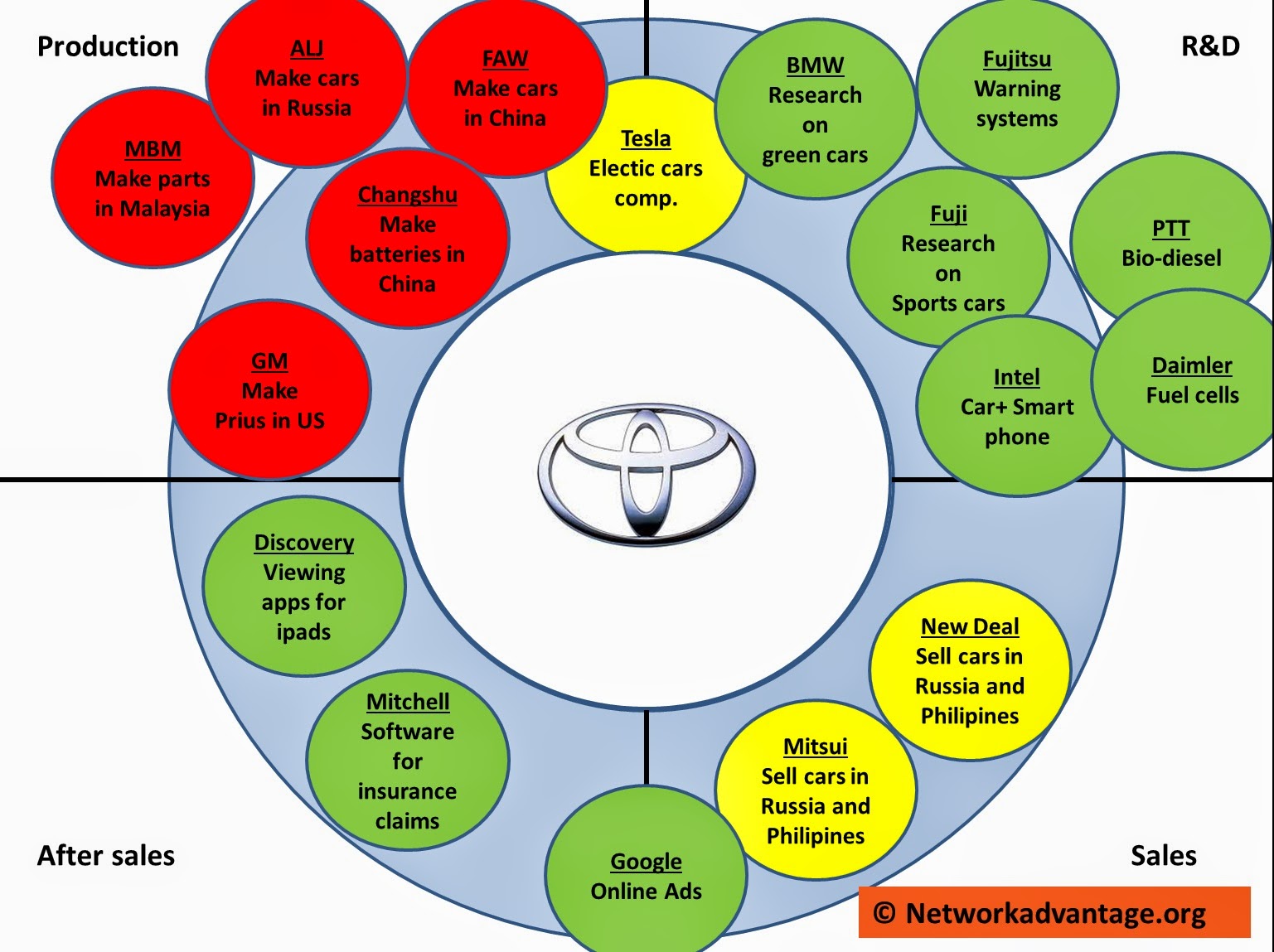 This approach helps us immediately see that most of production alliances are aimed at cost reduction (and efficiencies in general), whereas in other areas Toyota focuses on differentiation of its products.
We can also see areas in which Toyota can create value across different alliances. For example, let’s take three alliances and move them in the “bull’s eye”. Between 2008 and 2013, Toyota worked with Google to optimize search experience for Toyota’s products, collaborated with GM to make Prius in the U.S. and worked with Intel to integrate sensors inside the car with your smartphone. The tool tells us that Toyota can create value by integrating ideas across these three alliances and make a new product “Smart Social Prius”. I am not sure such car exists yet, but it is definitely in the works! 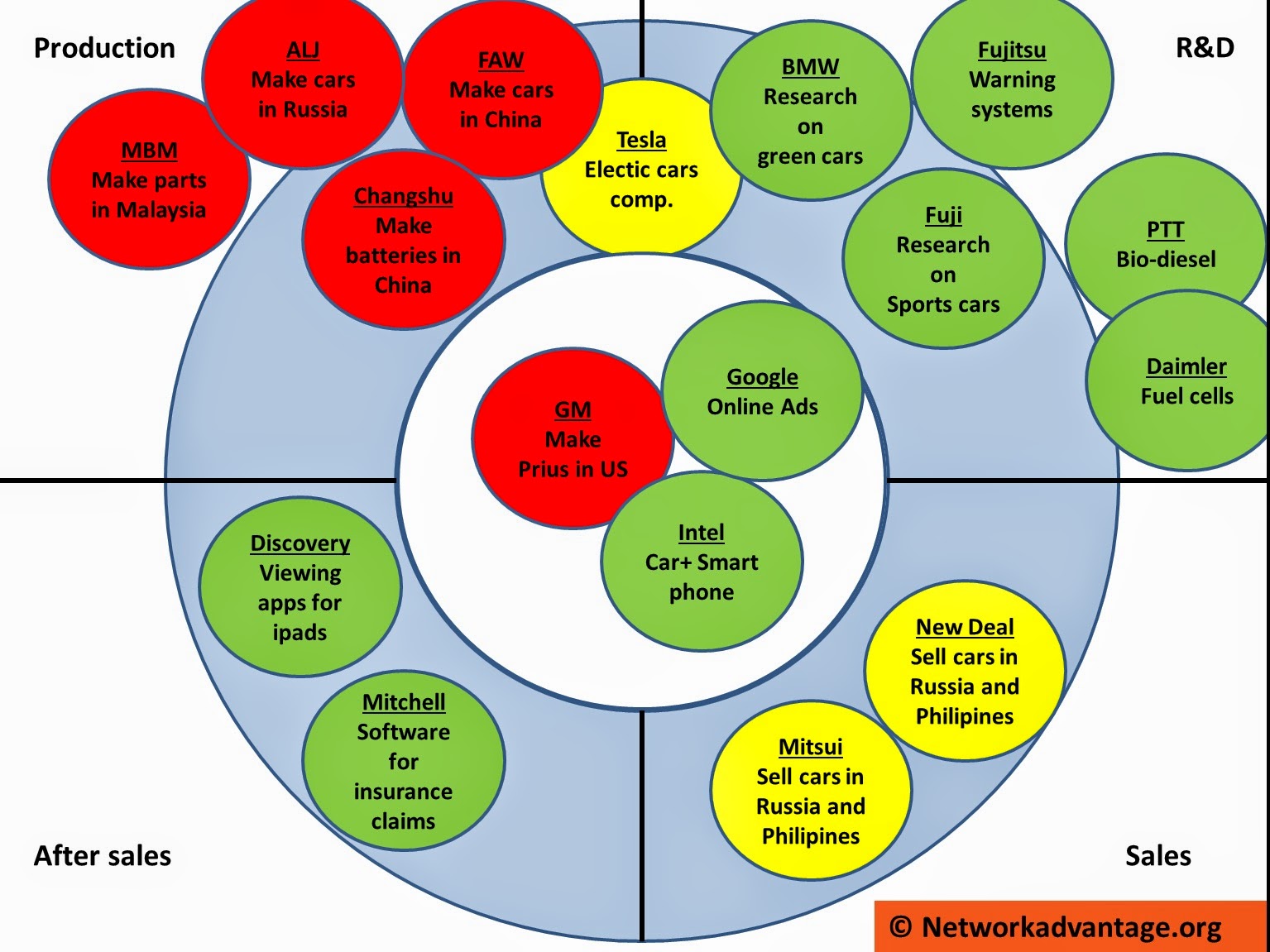 Because of Intel’s sensors, the car will feed information on your Prius driving habits to your social network. Some “friends” (like your parents or your insurance company) might actually want to know how well you are driving. In fact, an insurance company might even lower your premiums for good driving habits and make your insurance really “personal”! And you can even have a contest among your friends who is a safer (or environmentally friendlier) driver.
Now let’s compare Toyota’s Alliance Radar to that of Peugeot : 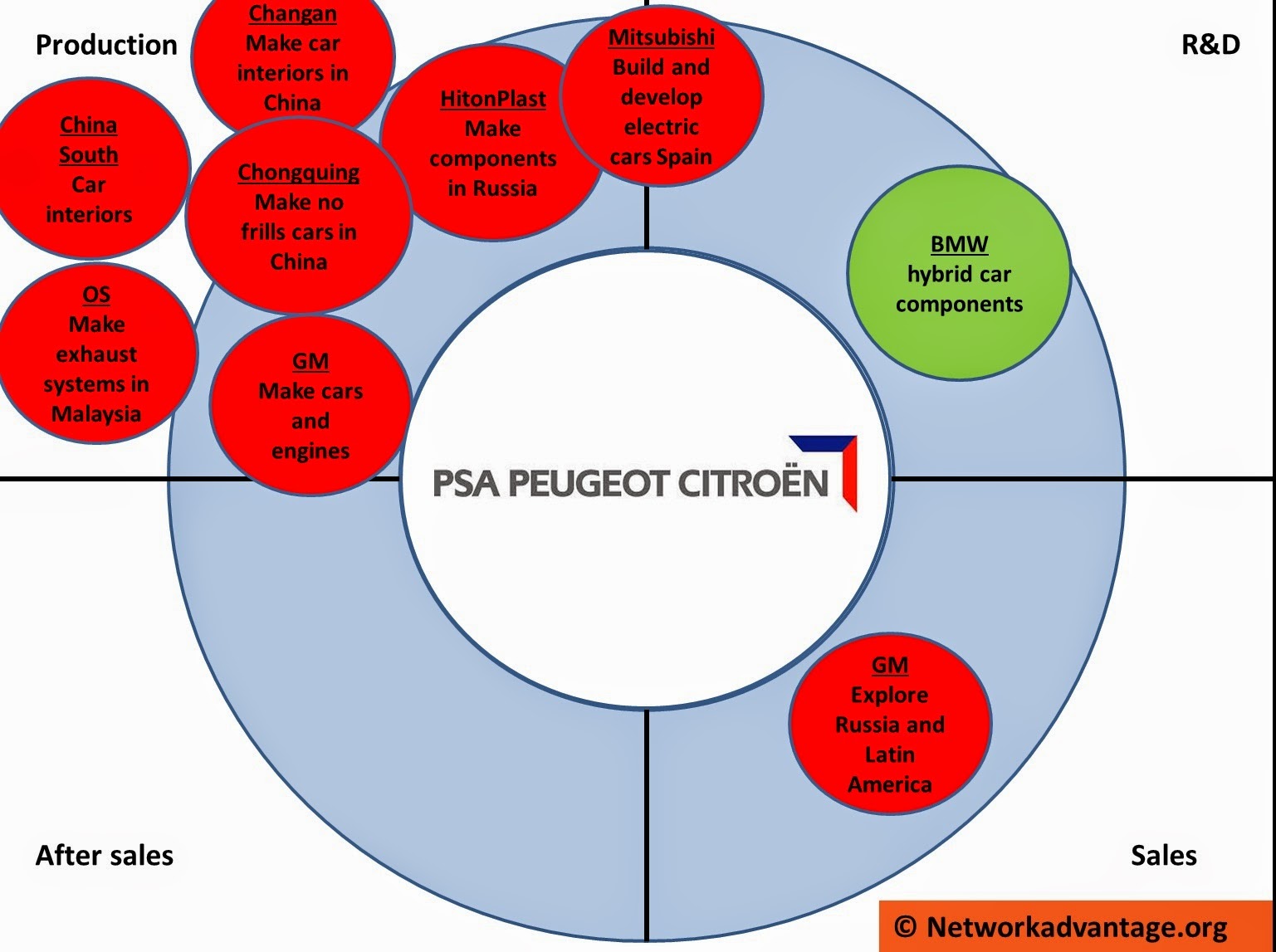 It is clear that Toyota has a lot more alliances than Peugeot, most of Peugeot's alliances are aimed at cost reduction and not much on differentiation. Peugeot has a lot fewer opportunities to innovate across alliances. For once, it can work with both Mitsubishi and Changan: make electric cars in Spain (with Mitsubishi) and outfit them with Chinese interiors. Not as exciting as a "Smart Social Prius"? Well, Peugeot's network of alliances doesn't allow it to do much better than that because most of the collaborations are focused on cost reduction anyway. If I were to consult to Peugeot, I would have suggested to take a hard look at their alliance network and see if they can collaborate with partners that can provide them with something better than just cost cutting. 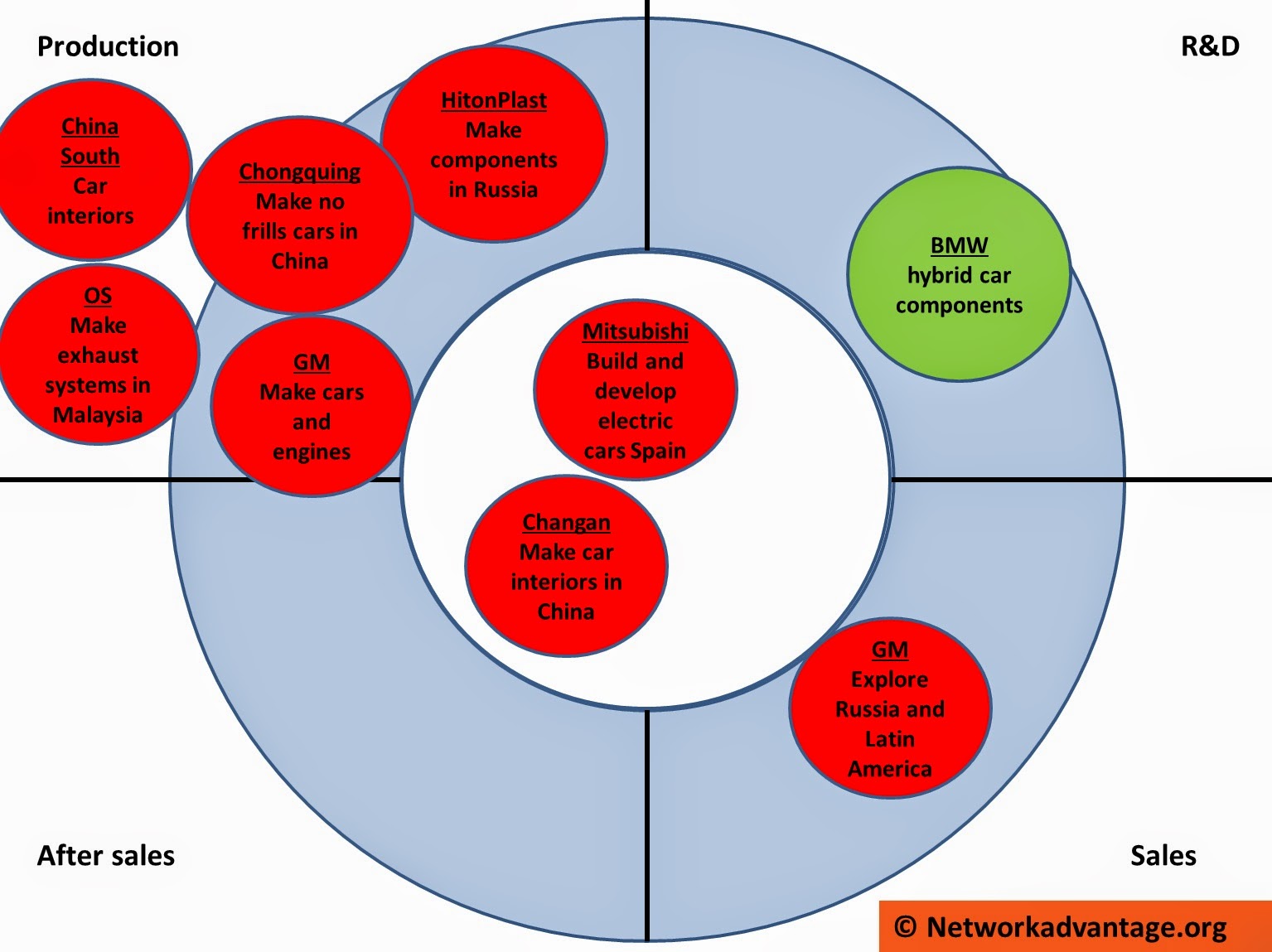 Does your company want to have a big space for innovations a la Toyota? The Alliance Radar tool can help you see the opportunities. Experiment with moving different circles into the bull's eye and challenge yourself whether you can create value by combining ideas or resources or market access across different partners. If you don't see exciting opportunities, then maybe you need new alliance partners!
Lately Peugeot has been on an upward swing financially. Sales are looking brighter as the European market recovers[4]. Hopefully the company builds more and varied alliances that will help it not only to cut costs, but also to create innovative solutions by integrating ideas, resources or market access across its customers, suppliers or even competitors.
If you find Alliance Radar tool to be useful for thinking about your company’s alliances or to identify new value creation opportunities (like a Smart Social Prius), share your story with me (shipilov@insead.edu).
If you want to discuss this tool, you can do so in the “Comments” section.