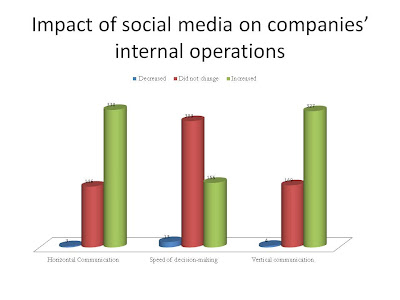 The impact of social media on industry structure

In the previous post, I discussed some results of a survey where we asked about how companies can use social media to achieve competitive advantage.
In that survey, Prof. Quy Huy and I, also asked participants to tell us how the structure of their industries was affected by the introduction of social media tools.
We conceptualized industry structure by using the well known Porter's 5 Forces framework. Essentially, we asked about the impact that the introduction of social media had on barriers to entry in the respondent's industry (i.e. did the barriers to entry increase, decrease or remain the same), intensity of competition (i.e. did it increase, decrease, remain the same), power of buyers (i.e. did this power increase, decrease or remain the same), power of suppliers (i.e. did this power increase, decrease or remain the same) and the threats of substitutes (i.e. did these threats increase, decrease or remain the same).
The results of the survey are presented in the slide below. To our surprise, social media did not change either barriers to entry, or suppliers' power or the power of the buyers. The majority of our respondents chose "did not change" answer for these three elements of industry structure.
Yet, the biggest effect of social media was on substitutes, i.e. most of the respondents told us that the introduction of social media in their industry increased the threat from substitutes. When we asked them what substitutes meant to them, many gave us examples of competing products or services (e.g. air travel operator claiming that the use of social media by other air travel operators increased the threat of substitutes). This tells us that even though we explained in the survey that substitutes were actually different products or services that served the same function (e.g. a bus is a substitute for air travel, while another air travel operator is actually a direct competitor) , our respondents still mixed the two.
Ultimately, if we add up the impact of social media on the intensity of competition with the threat of substitutes in the slide below, then we can say that social media did increase the threat from both.
Thus, social media did not change barriers to entry, power of buyers or suppliers, but it did increase the competition/threats from substitutes within the industries. The interesting part about these findings was that we expected social media to change everything: lower barriers to entry, increase the power of buyers and lower the power of suppliers, but this did not happen. So, the impact of social media on the industry structure is not as large as some might predict.
In the final part of the survey, we also asked about the impact of companies' internal social media use on the exchange of information between different functional units (e.g. R&D talking to marketing) and across different levels of hierarchy (e.g. bosses talking to employees and back). What was the response? Stay tuned, I will add one more post this week... 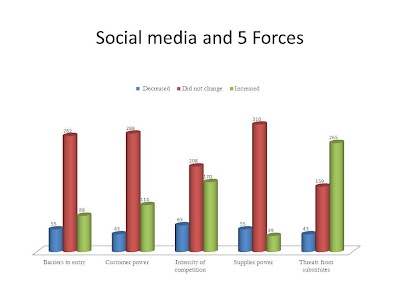 Posted by Andrew No comments:

Use social media to connect to your... suppliers!

Last year, an INSEAD professor Quy Huy (who also has a separate INSEAD blog), and I collected data on how companies used social media to achieve competitive advantage. We are currently working on a major thought piece using the most useful insights, but given that the journal review process takes a very long time, I thought that I could sharesome results in their general form.
We asked close to 1000 executives worldwide. About 50% said that their companies did not use social media at all, which was an interesting finding in itself.
The graph below shows which social media tools (video sharing, blogs, social networking, wikis, podcasts, microblogs) the companies that did use social media relied on and for what purposes. What is interesting is that companies use social networking as a principal social media tool, while they use microblogging and podcasts to a substantially lesser extent.
One of the more surprising findings was that social media tools are mostly used to interact with customers, as one would have expected, but they are used very infrequently for communicating with suppliers.
But this strikes us as a missing opportunity! Why do companies use social media to communicate with customers? Because they want to know more about customers, to build informal communication channels and build their brands with customers.
Why don't companies want to use social media with their suppliers to build collaborative communities with them? Using social media to build communities with suppliers could help customers exchange information with them, enabling suppliers to serve these customers better and make suppliers feel more attached to their customers.
One executive we interviewed told us an interesting story. A research and development department in his company used social media to build a collaborative community with a research and development department in a supplier's company. The engineers from both companies really enjoyed being members of this community. One day, the supplier's senior management decided to stop working with this company and start serving the company's competitors. Once the supplier's R&D engineers learned about this, they went to these executives and pushed really hard to continue working with their current customer, so that they could continue being members of the inter-firm collaborative community. Faced with this surprising revolt, the executives had no other choice than to stay with this customer.
So, our learning from this is the following: just like we want to connect to our customers with social media because we have a fundamental human need to be connected, we should do the same with our suppliers. In the networked world, connections to both customers and suppliers are important for the companies' competitive advantage.
Another interesting learning for us was that companies also used social media to improve horizontal communication across different functional units inside their organization (e.g. helping R&D departments to talk to Marketing) as well as to improve vertical communication across the levels of hierarchy (e.g. senior executives talking to lower level executives and the other way around). More on that usage of social media for competitive advantage in the next post...
Click on the image to enlarge: 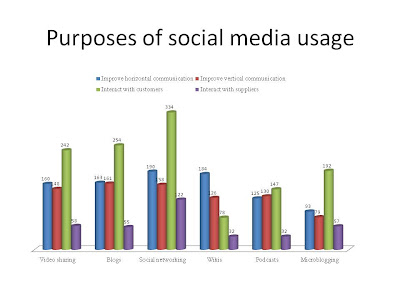 Posted by Andrew No comments: