To the investors of Research in Motion (RIM), the maker of Blackberry, the recent years have been really disappointing. It lost the fight to Apple and Samsung. There may be several explanations to this failure, but one which particularly stands out is the failure of RIM to build a strong alliance network. Alliances and partnerships are the sources of "network advantage"--the ability to improve operating efficiency and increase product innovation by combining resources and knowledge with partners. We discuss how companies can benefit from their relationships with customers, competitors and suppliers in a new e-book "Network Advantage: How to Unlock Value From Your Alliances and Partnerships". The print version of the book is available from January, 2014.

Let's look at the alliance network of RIM. This picture is built by looking at the RIM's alliance announcements between 2008 and 2011. Since these alliances happened a while ago, their positive or negative effects should be felt by now. 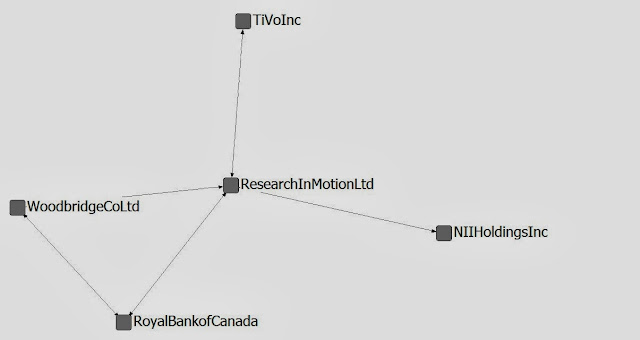 Did these alliances make sense? They sure did. But network advantage doesn't come to firms who simply build alliances, it comes to firms who build better (and more) alliances than competition. 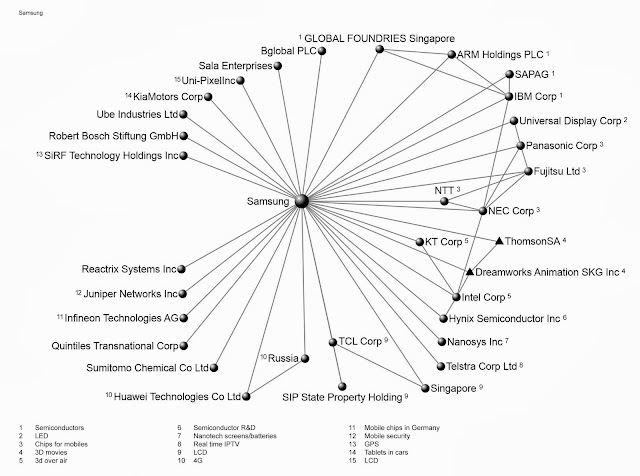 Samsung works with Kia motors to build the car around its Galaxy tab, manufactures 4 G communication infrastructure in Russia, collaborates with Telstra to develop Internet TV for mobile devices, works with Nanosys to build better screens and batteries for smartphones using the nanotechnology. It works with Intel and Juniper on mobile security solutions and works with Korean Telecom (plus Intel) to transmit 3D signal through the mobile grid. It works with Dreamworks and Technicolor (Thompson) to develop 3D movies and viewing equipment. We might soon have 3D video enabled mobile phones!!!... Not to mention the fact that Samsung uses apps from Android platform for its phones.

In short, the alliance network of Samsung allows it more (and cheaper) opportunities to innovate not only in hardware but also in content.
The sad story of RIM did not begin this year. It began several years ago when it failed to build a big enough network of alliances and partnerships to counter the network of Samsung (and of course the network of Apple). Samsung has excelled at the global alliance game and extracted its Network Advantage. Kudos to Samsung and condolences to RIM. May your company not repeat the RIM's mistakes!
Posted by Andrew